Perfect jumps are performed by jumping on the first frame possible as Yoshi is landing on the ground. These jumps produce several interesting effects, most notably due to the fact that the game does not seem to register Yoshi as 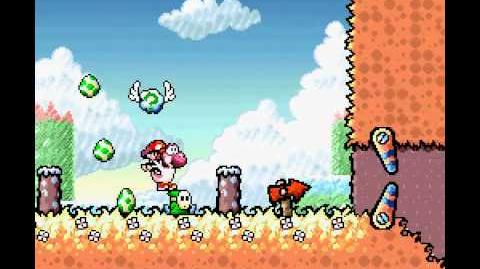 having landed on the ground at all if a perfect jump is performed. This is often used in conjunction with an extended flutter: whenever Yoshi bounces on an enemy, he gets a much longer, and higher flutter that can be used to reach high areas. However, the flutter must be initiated before landing or else it is canceled, i.e. you must use an extended flutter immediately after bouncing on an enemy. This cancellation can be avoided by using a perfect jump, as the game never registers Yoshi as having touched the ground. This is seen in the 1-2 skip, which this video demonstrates.

In this video: First, it is shown that simply bouncing on a shyguy does not achieve enough height to clear the cliff. Second, a shyguy bounce followed by a failed perfect jump fails to give an extended flutter. Finally, the perfect jump is executed, granting an extended flutter even after jumping off of the pole, giving enough height to clear the cliff and complete the level.

Also used for an autoscroller skip in 6-5, see Screen Scrolling for more information. 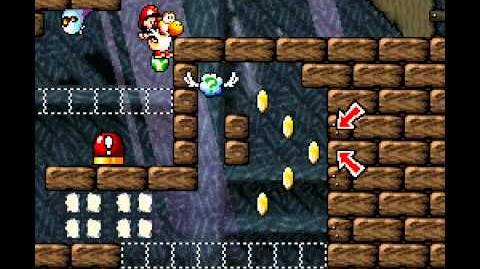 Normally, a flutter is done simply by pushing jump and holding it down until a flutter begins. This produces a flutter which both comes out later, and does not give Yoshi optimal height. If jump is manually released right as Yoshi begins to fall, and then very quickly repressed (1-3 frames later), Yoshi will perform a flutter which travels a bit higher up. This is used to access several locations otherwise too high for Yoshi to jump to, such as the area above the red switch in 2-4 or traveling over the stone column in 6-4. 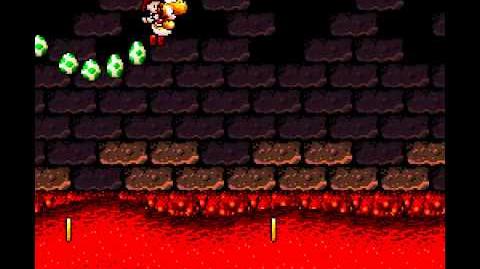 Perfect flutters can be chained indefinitely so that Yoshi does not lose height throughout consecutive flutters (in fact, several pixels of height can actually be gained between flutters). This is used to travel across areas that must be fluttered across to avoid slowing down (such as the water in 3-4), or even to gain even more height than a single perfect flutter.

Doing it over a long period of time is incredibly difficult, as in the 6-4 lava skip demonstrated in this video. 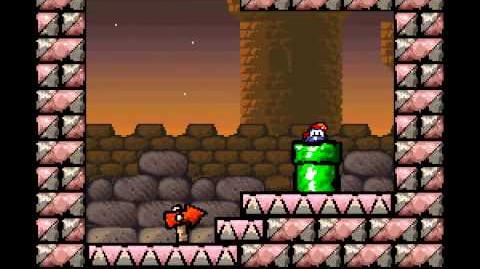 If down and jump are pressed on the exact same frame over a pipe, Yoshi both jumps and goes down the pipe. On most pipes, this saves just under 30 frames by speeding up the time it takes yoshi to exit the screen since it skips the animation where he climbs into the pipe. However, on a few pipes in the game, this trick might cause a 1-1 warp. It may also cause a warp to adjacent rooms, as in the second pipe in 2-1 or 2-8. See Warp Glitches.

Video: In this video, the three animations of pipe jumps are displayed. The first is simply pressing down + B at the same time. The second is down + B + Y. And the last is down + B + A. 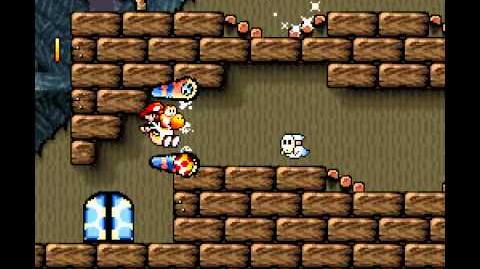 There are many one-way gates in Yoshi's Island that can actually be opened backwards by several methods. By far the easiest real-time method for opening a gate from behind is to throw a straight upward-aimed egg at just the right spot towards the top of the gate. The egg glitches into the gate, and knocks it open, thus allowing Yoshi to go through an otherwise closed gate. This is used to save time in 2-4 any%, skipping the staircase that is typically used in that area.

Another gatehack is used in 6-7 where you carry over the momentum of a Spiked Fun Guy (or its pot) by tonguing it while it travels left, spit it out while pushing towards the gate, the negative x-velocity of the enemy opens the gate for you.

However this trick requires the gate to be spawned with the correct camera position.

This trick works with anything that bounces off the gate (Melon Bugs unconfirmed).

After shooting an egg or spitting an enemy onto a Wild Ptooie Piranha(green Piranha Plant), it is possible to travel through them for 32 frames(about half a second) without taking a hit.

It is also possible to damage boost through these Piranha Plants by facing backwards and running/fluttering into them. Some might find this more consistant than the egg shooting method, however this method is slower.

Normally Caged Ghosts take atleast 4 egg shots to jump over, however when Ghosts spawn they grow from min-max size, shooting them during the growing phase causes them to stop growing and reduce by 1 size. This can be abused to save both eggs and time. There are 2 of these in 3-8

Another skip is used in 6-E where you spit the first Mace Guy into the vertical Caged Ghost.

Generally, the screen scrolls depending on where Yoshi is heading.

Enemies, collectables and event triggers only spawn when the screen is scrolled properly. This is abused many times in speedruns as for examples the 6-5 autoscroller-skip, spawning red coins for 1-7 beanstalk skip and a flower for 1-2 helicopter skip.

You cannot load more than 24(?) sprites on the screen at once. Keep in mind that some sprite slots are reserved for important stuff such as Baby Mario, Toadies etc.

For speedrunning, this mechanic has both pros and cons.

This can be abused to despawn for example: Enemies, Save Rings and Gates to save time. Most noteable is the Bullet Bill Launcher despawn in 2-7.

This can be frustrating for 100% speedruns as it can despawn Fly Guys carrying Red Coins/Star Clouds, which will never respawn even though you go back to reload them.

It is possible to duplicate Red Coins carried by PATROLLING Fly Guys. You do this by tounguing the Fly Guy, not picking up the Red Coin, going off-screen and spitting it out without killing it and going back to respawn the Fly Guy.

It's possible but hard to dupe 2 Red Coins(3 in total) from the same Fly Guy in real-time.

Community content is available under CC-BY-SA unless otherwise noted.